In the late 1960's, Catholic worship services were held in the Lazy B Motel. Owners Aub and Malene Wegmer used one of their vacant motel rooms to hold the service with a priest, their six children, and a handful of other attendees. Their hopes for a larger space were answered when Bishop Newell insisted that Father Taylor go to Jackson, Wyoming, and restore church activity.

In 1972, Father Taylor held mass in the Veteran's Building (Lincoln County Branch Office) in Afton. With the help of its members, the Catholic group purchased 19 acres off highway 89 in Afton for a potential building site. It wasn't until 1976 when Charles Bartek became pastor of the Jackson, Wyoming that the construction of the church building began. Pastor Bartek and Dale Motzkus drew out the plans and got to work. The church was dedicated in 1978 by Father Bartek. Thanks to the donations from its locals and members from various parishes nearby, the beautiful building was paid off.

The Holy Catholic Church continued to grow. By 1998, church membership had risen to 80 families. Major projects were taken to update the Afton building. The building was repainted, re-carpeted, and the parking lot was repaved. Minor setbacks in the town lowered attendance later that year due to restrictions on logging in the National Forest. Some of the members lost their jobs and had to move elsewhere. But the church's finances continued to grow. It was in the year 2000 that the financial committee was instigated.

With membership as high as 150 families in 2011, the crowd was outgrowing the Afton church building. Father Geder determined another worship building needed to be established. It was on May 28th of 2011 that all the Parish's financial efforts paid off. The Thayne church construction began. Thayne's church building was carefully laid out, with rows upon rows of pews to accommodate visitors and a ramp for wheelchair access. Its tall steeple and Romanesque structure are traditional and beautiful, with an exquisite stain-glass mural of Joseph and Mary cradling baby Jesus and a young lamb.

The Holy Family Catholic Church is well attended and open to visitors. Father Demetrio is the current pastor for Mass sessions. When asked what Mass is about, Phillip Vanderlin of the Holy Family Catholic church says, “When people understand the 6th Chapter of St. John's Gospel about the Bread of LIfe, they want that Bread (The Eucharist)... John 6 is essential for understanding the Eucharist.”

Mass is held as 10:30 a.m. every Sunday. For Covid-19 restriction status and other information, go to https://holyfamilywy.org/about-us. 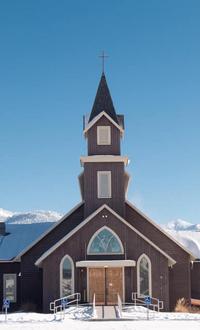