For Star Valley anglers, this is what we have been waiting all year for. The streams are either clear or are nearly so. The high country lakes are becoming ice free, and the trails to them are opening up. The tributary streams are now accessible as is the Greys River corridor. “Where do I go first?” is the question of the day. Late June, July and August are not long enough to fish everywhere the fish are biting, unless you quit your day job or risk divorce. What methods are best for fishing is another question. Let's begin.

The where to go question can be related to whether you are fishing alone or with another serious angler, or whether children or another inexperienced person will be in your company. In the latter situation, consider the first Saturday in June (Wyoming's free fishing day) because no license is required that day, the Afton Municipal Golf Course pond will be stocked with trout, and there will be folks there to help novices catch trout. Otherwise, you might consider the two small reservoirs on Swift Creek, which the Game and Fish stock with catchable size cutthroat trout. Most methods will work for the first fish or two, but these trout can suddenly become somewhat selective in what they will take. If fish are rising, try to determine how large of an insect they are eating. If a larger fly isn't working, try a smaller fly. Usually some size or version of a Parachute Adams will do the trick. At times there can be others fishing near you on these small ponds. If you want more solitude but easy fishing, the tributaries to the Salt River can be fun for the novice. Much of Spring Creek near the town of Fairview is on the National Forest, and you are likely to catch trout on anything you use. A section of Crow Creek (in Idaho) is also National Forest. Willow Creek north of Grover has a public easement area that can be fished by anyone. The head of Salt River is also a great place for a scenic hike and eager trout.

While everything from bait to flashy spinners and other lures work well all summer, this is the time fly fishermen and women love. Also, there is one stretch on the Salt River beginning a short distance downstream of the Highway 238 bridge to the Diversion Dam, popularly known as “Fish Fry,” that is restricted to flies and artificial lures only. The exception in that stretch is the Diversion Dam pool itself where bait may be used. On the Greys River, there are similar rules from Murphy Creek upstream to Corral Creek.

As a general rule, the larger aquatic insects hatch in the early summer meaning June and into the first weeks of July. In a low water year when Salt River is clear most of June, this can be a bonanza for fishing large dry flies imitating big stoneflies and larger mayflies and caddis. In good water years the big stonefly hatch may not be fishable, at least with dry flies. The same goes for Greys River and Little Greys River. That doesn't mean that fishing with large dry flies ends in early July. Grasshoppers and other terrestrial insects such as beetles and ants tumble into the water, and trout are ready to grab a larger meal when possible. That brings up streamer fishing. Streamers are large flies shaped and colored to look like minnows. Trout of all sizes love to eat minnows, and trophy fish may eat them nearly exclusively. Streamers are fun to fish because they work best when lots of action is given to them by the angler, and when a trout attacks, it is usually a pretty hard hit (use a stout tippet). Generally, they work best early morning, late evening, or on a cloudy day.

If you have ever examined the stomach contents of a trout, you realize that most of the food they eat consists of the bugs and nymphs they find along the bottom of the stream or somewhere else in the column of water in the stream or lake. Nymph fishing is not as hard as one would think. Guides tend to use it a lot by suspending a weighted nymph or two under a strike indicator (a bobber is a strike indicator for a worm fisherman). When the little colored piece of yarn, or plastic bubble or whatever is used, jiggles, moves unnaturally, or dives under the water, the angler sets the hook and has either hooked a fish or a snag. A large, buoyant dry fly such as a Chubby Chernobyl can also be used as a strike indicator. In this case the trout may decide to take the big dry fly rather than the trailing nymph. This increases the chance for success. One caveat to fishing nymph rigs, the fly caster needs to “open up” the loop on the cast to avoid having the weighted nymph wrap itself around the fly line or the rod or, worse, your companion's line or rod. When a fly line is cast properly, it forms a candy-cane like loop as it unfolds towards the target. A narrow “candy-cane loop” works well for single flies particularly when punching into the wind or for long distance casting. For nymph rigs and heavily weighted flies, a wider loop usually works better. It's called chuck and duck.

Summer is a popular time for everyone to go fishing, so being courteous to other anglers on the river or lake is important. If you spot someone catching a lot of fish, it is discourteous to the extreme to take a position next to them. If you are walking the bank, give them a wide birth and move some distance after passing them before you begin fishing. If you are floating and encounter an angler standing in the stream, ask the angler if you can float behind him if there is enough water to pass that way so that you do not disturb the water he is fishing. I was impressed one day when a lady guide spoke to me as she passed the spot where we were anchored and said she would not have her client fish the next three holes downstream of us. All floaters need to enjoy the river — it is public water after all.

Good fishing to you this summer!


Editor's note: Paul said to me, "The 2nd photo [below] shows both me and the fish smiling, which proves that fish enjoy being caught and released!" 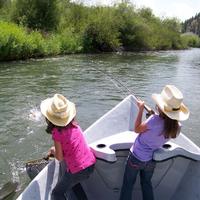 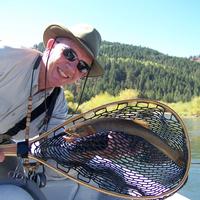